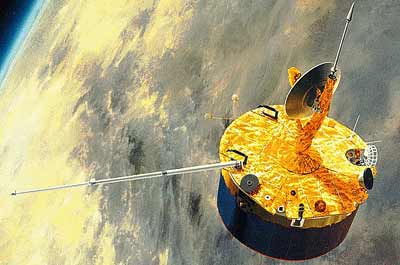 The Pioneer Venus Orbiter (PVO, Pioneer 12) was inserted into an elliptical orbit around Venus on 4 December 1978. The Orbiter was a flat cylinder 2.5 m in diameter and 1.2 m high. All instruments and spacecraft subsystems were mounted on the forward end of the cylinder, except the magnetometer, which was at the end of a 4.7 m boom. A solar array extended around the circumference of the cylinder. A 1.09 m despun dish antenna provided S and X-band communication with Earth.

The Pioneer Venus Orbiter carried 17 experiments (with a total mass of 45 kg):

From Venus orbit insertion to July 1980, periapsis was held between 142 and 253 km (at 17 degrees north latitude) to facilitate radar and ionospheric measurements. The spacecraft was in a 24 hour orbit with an apoapsis of 66,900 km. Thereafter, the periapsis was allowed to rise (to 2290 km at maximum) and then fall, to conserve fuel. In 1991 the Radar Mapper was reactivated to investigate previously inaccessible southern portions of the planet. In May 1992 Pioneer Venus began the final phase of its mission, in which the periapsis was held between 150 and 250 km until the fuel ran out and atmospheric entry destroyed the spacecraft the following August.