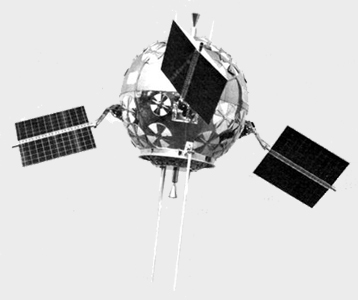 The Pioneer P-1, -3, -30 and -31 series was intended to be a lunar orbiter probe, but the mission failed shortly after launch. The objectives were to place a highly instrumented probe in lunar orbit, to investigate the environment between the Earth and Moon, and to develop technology for controlling and maneuvering spacecraft from Earth. It was equipped to take images of the lunar surface with a television-like system, estimate the Moon's mass and topography of the poles, record the distribution and velocity of micrometeorites, and study radiation, magnetic fields, and low frequency electromagnetic waves in space. A mid-course propulsion system and injection rocket would have been the first U.S. self-contained propulsion system capable of operation many months after launch at great distances from Earth and the first U.S. tests of maneuvering a satellite in space.

All probes were 1 meter diameter spheres with a propulsion system mounted on the bottom giving a total length of 1.4 meters. The mass of the structure and aluminum alloy shell was 25.3 kg and the propulsion units 88.4 kg. Four solar panels, each 60 × 60 cm and containing 2200 solar cells in 22 100-cell nodules, extended from the sides of the spherical shell in a "paddle-wheel" configuration with a total span of about 2.7 meters. The solar panels charged chemical batteries. Inside the shell, a large spherical hydrazine tank made up most of the volume, topped by two smaller spherical nitrogen tanks and a 90 N injection rocket to slow the spacecraft down to go into lunar orbit, which was designed to be capable of firing twice during the mission. Attached to the bottom of the sphere was a 90 N vernier rocket for mid-course propulsion and lunar orbit maneuvers which could be fired four times.

Around the upper hemisphere of the hydrazine tank was a ring-shaped instrument platform which held the batteries in two packs, two 5 W UHF transmitters and diplexers, logic modules for scientific instruments, two command receivers, decoders, a buffer/amplifier, three converters, a telebit, a command box, and most of the scientific instruments. Two dipole UHF antennas protruded from the top of the sphere on either side of the injection rocket nozzle. Two dipole UHF antennas and a long VLF antenna protruded from the bottom of the sphere. The transmitters operated on a frequency of 378 MHz.

Thermal control was planned to be achieved by a large number of small "propeller blade" devices on the surface of the sphere. The blades themselves were made of reflective material and consist of four vanes which were flush against the surface, covering a black heat-absorbing pattern painted on the sphere. A thermally sensitive coil was attached to the blades in such a way that low temperatures within the satellite would cause the coil to contract and rotate the blades and expose the heat absorbing surface, and high temperatures would cause the blades to cover the black patterns. Square heat-sink units were also mounted on the surface of the sphere to help dissipate heat from the interior.

The scientific instruments consisted of an ion chamber and Geiger-Mueller tube to measure total radiation flux, a proportional radiation counter telescope to measure high energy radiation, a scintillation counter to monitor low-energy radiation, a VLF receiver for natural radio waves, a transponder to study electron density, and part of the television facsimile system and flux-gate and search coil magnetometers mounted on the instrument platform. The television camera pointed through a small hole in the sphere between two of the solar panel mounts. The micrometeorite detector was mounted on the sphere as well. The total mass of the science package including electronics and power supply was 55 kg.

The difference between the payload of Pioneer P-30 and the earlier Pioneer P-3 was the replacement of the TV facsimile system on P-3 with a scintillation spectrometer to study the Earth's (and possible lunar) radiation belts, mounted on the instrument platform, and a plasma probe mounted on the sphere to measure energy and momentum distribution of protons above a few kilovolts to study the radiation effect of solar flares. The total mass of the science package including electronics and power supply was roughly 60 kg.

The only difference between Pioneer P-31 and the earlier Pioneer P-30 was the addition of a solid state detector sensitive to low energy protons on the satellite and an STL-designed rubidium frequency standard experiment placed on a pod attached to the booster. The total mass of the science package including electronics and power supply was roughly 60 kg.

P-1 (Able IV) was orignally planned to be a Venus Fly-by mission, but was later replanned as a lunar orbiter. It was to be launched on a Atlas-C Able vehicle. The launch vehicle was destroyed by an explosion during the pre-launch firing test. The payload was not mounted on the rocket at this time, so it was later launched as the P-3 mission.

P-3 (Able IV) was the renamed spacecraft P-1 and was eventually launched on an Atlas-D Able. The plastic payload shroud broke away 45 seconds after launch, subjecting the payload and third stage rocket to critical aerodynamic loads. At 104 seconds after launch communications with the upper stages was lost and the payload was stripped off followed by the third stage. Telemetry indicated the first and second stages continued as programmed.

P-30 (Able VA) was launched on an Atlas-D Able. The first stage burned normally for 275 seconds, the two Atlas booster engines were jettisonned as planned after ~250 seconds. At an altitude of about 370 km the first stage separated from the second stage. When the second stage was ignited telemetry showed abnormal burning and the stage failed due to a malfunction in the oxidizer system. The third stage fired upon command from the ground and the probe successfully fired its hydrazine engine to separate from the spent rocket motor. But without attaining the proper velocity and far off course, the payload was destroyed upon reentry 17 minutes after launch. The vehicle was believed to have come down somewhere in the Indian Ocean. Signals were returned by the payload for 1020 seconds after launch. The mission was designed to reach the Moon approximately 62 hours after launch.

The P-31 (Able VB) spacecraft was launched on an Atlas-D Able. The vehicle exploded 68 seconds after launch at an altitude of 12 km due to a malfunction in the first stage. The payload fell into the Atlantic Ocean 12 to 20 km from Cape Canaveral in about 20 meter deep water.