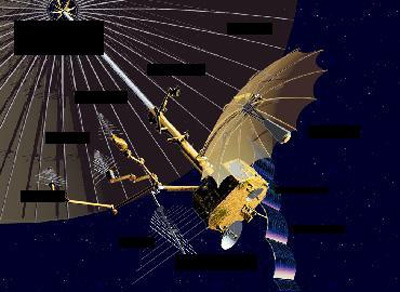 The Orion 5 - 9 (RIO 5 - 9) satellites, which are generally known as 'Advanced Orion' or 'Mentor', are geostationary signals intelligence satellites, which replaced the earlier Mission 7600 Magnum / Orion series. Their purpose is to intercept missile telemetry from Russia and China and the COMINT capability of the Mission 7500 Mercury satellites was merged into this series. These satellites are launched under the designation Mission 8300.

Although this satellite series was originally designed for FISINT (Foreign Instrumentation Signals Intelligence), they are now primarily used as COMINT collectors, with about 85% of their work is againt COMINT targets. Some were collocated with Thuraya mobile communications satellites to tap into the satellite mobile phone communications of this system.

These satellites feature a large dish antenna for signal reception, which has reportedly a diameter of ~100 m. The main body has the shape of an octagonal prism, carrying an large array of different antennas, among them a smaller deployable dish. The combination of fixed and steerable feeds allows simultaneous collection againt multiple signal types (COMINT, ELINT, MASINT, etc.) located across a broad geographic aera. The satellites of this series are injected directly into the final orbit by the launch vehicle's upper stage, so they do not feature an apogee propulsion system.

The 8300 satellites feature increased bandwith channels and downlink capacity for wideband collection, espacially TECHELINT from modern modulation emitters. Also they add an dedicated second dish antenna for ELINT, test range surveillance and signal search. The satellites in conjunction with the Mission 8200 satellites provide high-accuracy OPELINT geolocation capability through cross-site and cross-system operations. By merging the tasks of Missions 7500 and 7600, a common high sensitivity spacecraft design can be used, which has the capability to relocate as required providing flexile crisis and contingency support.

Additionally to the SIGINT task, these satellites reportedly also included a communications cross-link system in space and had some limited data relay capability.

The baseline Mission 8300 constellation consists of at least three satellites, operated from Pine Gap, Australia, and from Menwith Hill, UK. If older satellites are available, they operate in a larger constellation.