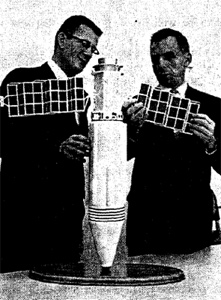 MIDAS Series 2 carried a new infrared payload built by Baird-Atomic, one that featured 175 detectors capable of sensing ICBM targets at a maximum slant range of 4200 nm, The payload was designed to scan at a rate of 6 rpm, a rate of rotation three times faster than the Series I payloads. Every lO seconds the detectors would view approximately 25 million square nautical miles of the Earth's surface, allowing as many as nine possible "looks" at an ICBM between the time it reached 35,000 feet and missile burnout. That number of looks was believed sufficient to identify the direction of missile travel.

The Agena-B upper stage of the Atlas-LV3 Agena-B launch vehicle was used as the spacecraft bus and provided power and attitude control to the MIDAS payload. The Agena-B was nearly twice the length of its Agena-A predecessor. The increased tankage and a new dual-burn rocket engine would permit reaching a planned circular polar orbit at an altitude of 3400 km, the orbit then considered most appropriate for an operational constellation of MIDAS satellites. Two deployable solar arrays were mounted on the aft equipment rack of the Agena-B to provide power.

On 12 July 1961 the Atlas booster carrying MIDAS 3 lifted off from Vandenberg AFB and successfully reached a 3400 km circular polar orbit. An hour later they despaired. One of the two solar arrays had failed to deploy properly. Only limited payload data was obtained before a power failure occurred in the Agena. The mission was over after five orbits.

On 21 October 1961 the Air Force launched MIDAS 4. An Atlas roll-control failure shortly after launch propelled the Agena into an improper ascent trajectory. After separating from the Atlas, the Agena used an abnormal amount of attitude control gas during first and second burns as onboard systems sought to compensate for the trajectory dispersion. Once in orbit, the Agena's attitude continued to fluctuate and all control gas was exhausted by the time it completed its first revolution of the Earth. One of two solar arrays aboard the tumbling Agena failed during the fourth orbit, power depleted, and all electrical equipment was shut down after the 56th orbit.

MIDAS 5, the third and last of the Series 2 flights carrying a Baird-Atomic infrared payload, lifted from Vandenberg AFB on 9 April 1962. The spacecraft achieve its planned polar orbit, stabilized properly, and the solar arrays extended and began generating the needed electrical power. Turned on, the infrared payload checked-out during the first few orbits of the Earth. During the sixth orbit a massive electrical power failure occurred aboard MIDAS 5, and all control over the vehicle was lost.

Some satellites carried secondary payloads mounted on the Agena-stage: