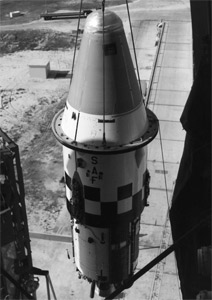 The Aerojet payload built for the first two low-altitude test demonstration flights consisted of a Bouwers-concentric telescope and 27 lead sulfide detectors. Mounted in a fork beneath the spin table, the telescope elevation could be adjusted on command. The spin table would rotate 360 degrees at 2 rpm about the vertical axis of the satellite in a nose-down attitude.

The Agena-A upper stage of the Atlas-LV3 Agena-A launch vehicle was used as the spacecraft bus and provided power and attitude control to the MIDAS payload.

These initial test flights were to be launched into low altitude, near-equatorial orbits from Cape Canaveral, Florida.

MIDAS 1 was launched on 26 February 1960, but improper separation of the Agena second stage caused it to collide with the Atlas first stages, leading to the destruction of the vehicle.

The second satellite, MIDAS 2 was successfully launched into orbit on 26 May 1960, but the satellite tumbled as it circled the Earth and, after the first dozen orbits, the Agena communication link failed. The payload could not be operated as planned.