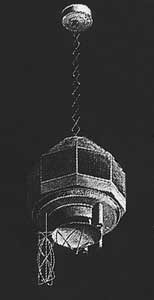 The Geodetic and Earth Orbiting Satellite 3 (GEOS-3) was the third in a series of geodetic missions initiated by NASA. GEOS-3 objectives included defining the structure of the earth's irregular gravitational field and refining the locations and magnitudes of the large gravity anomalies, comparing results of the various systems onboard the spacecraft to determine the most accurate and reliable system, and mapping the ocean surfaces.

The GEOS 3 (Geodynamics Experimental Ocean Satellite) spacecraft was an octahedron, topped by a truncated pyramid, with a parabolic reflector for a radar altimeter on the flat bottom side. A metal ribbon boom with end mass extended upward approximately 6.1 m from the top of the pyramid. Passive laser retroreflector cubes were mounted in a ring around the parabolic reflector with the normal vector from each cube facing 45 deg outward from the direction of the earth. A turnstile antenna for VHF and UHF frequencies and separate antennae for earth-viewing 324 MHz Doppler, C-band, and S-band transponders were mounted separately on flat surfaces next to the parabolic reflector. The dimension across the flats of the octahedron was 1.22 m, and the spacecraft was 1.11 m high. Mission objectives were to perform a satellite altimetry experiment in orbit, to support further the calibration and position determination of NASA and other agency C-band radar systems, and to perform a satellite-to-satellite tracking experiment with the ATS 6 spacecraft using an S-band transponder system. This system was also used for periodic GEOS 3 telemetry data relay through ATS 6, to support further the intercomparison of tracking systems, to investigate the solid-earth dynamic phenomena through precision laser tracking, to refine further orbit determination techniques and determine interdatum ties and gravity models, and to support the calibration and position determination of NASA Spaceflight Tracking and Data Network (STDN) S-band tracking stations. The following instrumentation was onboard this spacecraft: