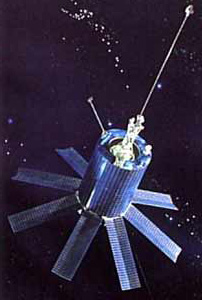 The soviet/Russian LEO geodetic system, known as GEO-IK or Musson, is a second generation design which debuted in 1981 and has averaged one new launch each year of the Musson class satellites. Geo-IK replaced the earlier Sfera satellites.

With normally one or two satellites operational, the GEO-IK network can assist the user in:

GEO-IK satellites are deployed in nearly circular orbits with a mean altitude of 1,500 km at inclinations of 73.6 degrees or 82.6 degrees. (Since 1986 only the former inclination has been utilized.) Each spacecraft is launched by the Tsiklon-3 booster from the Plesetsk Cosmodrome. The Applied Mechanics NPO of Krasnoyarsk is the principal designer and manufacturer of the 1500 kg GEO-IK. The satellite bus is similar in appearance to the Tsikada navigation satellites, i.e., primarily a right cylinder with a gravity-gradient stabilization system at the top and payload antennas, etc., attached to the bottom. However, eight panels extend like petals from the bottom of the spacecraft to provide additional electrical power in conjunction with nickel-hydrogen storage cells. Also like Tsikada, payload and support systems are primarily contained within a pressurized, temperature-controlled container located inside the cylindrical, solar-cell array.

Geodetic analyses can be performed with any one of five payload systems. A 9.4 GHz radar provides altitude determination above the sea surface with an accuracy of 3-5 m. A two frequency (150 MHz and 400 MHz) doppler system (1-3 cm/s accuracy) operates up to 12 hours per day, and a 5.7/3.4 GHz transponder is also available on demand to provide ranging data to within 3-5 m. Laser corner reflectors with a total area of 0.024 m² are installed on the spacecraft permitting range determinations to within 1.5 m. Finally, a light signaling system producing a series of nine high intensity (800-1200 J) flashes at a rate of 1/3 Hz can be used in conjunction with ground-based observatories to determine the satellite's position against the star background to within 1.5 arc seconds. The light signaling system can be activated up to 55 times per day.