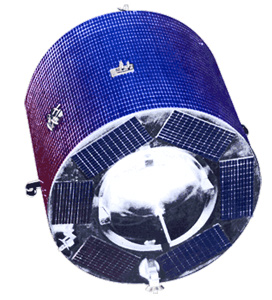 The Sfera or Geoid series were the first soviet geodetic satellites to improve the accuracy of maps. The development of the satellites started in 1965 at NPO-PM.

The cylindrical satellites were equipped with flashing lights to simultaneously photograph the Sfera satellite's position relative to starfields in the backgriound with an accuracy of 3-6 arc seconds. With this data, positions of points located at great distances from each other could be determined with a precision of 25-30 meters. The satellites additionally carried a radio transmitter which allowed to determine the satellite's velocity with an accuracy of 0.1 meter per second by measuring the Doppler shift of the signal.

The satellites were at the beginning typically inserted in 1200 km orbits with an inclination of 74°, where the atmospheric disturbances ar neglectible. Later the orbital height was increased to 1300 - 1400 km.

Designed for a 6 month lifetime, most of the satellites lasted much longer. Initially the system suffered from various problems, but in 1973, the Sfera system was declared operational. Sfera satellites were operated until 1980, when this system was replaced with the more advanced Geo-IK (Musson) satellites.