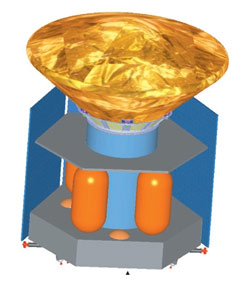 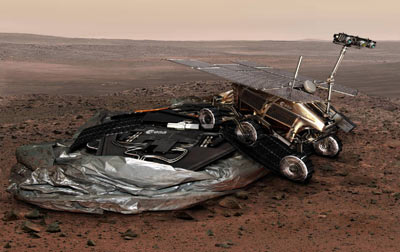 It will demonstrate the descent and landing of a large payload on Mars; the navigation and operation of a mobile scientific platform; a novel drill to obtain subsurface samples; a sample processing and distribution system; and meet challenging planetary protection and cleanliness levels necessary to achieve the mission's ambitious scientific goals.

Establishing whether life ever existed, or is still active on Mars today, is one of the outstanding questions of our time. It is also a prerequisite to prepare for the future human exploration of the Red Planet.

ExoMars will deploy a Rover named Rosalind Franklin carrying a comprehensive suite of analytical instruments dedicated to exobiology and geology research: the Pasteur payload. The Rover will travel several kilometers searching for traces of past and present signs of life, collecting and analysing samples from within surface rocks and from the subsurface, down to a depth of 2 meters.

The ExoMars Rover mission was to be complemented by the Humboldt payload, to be accommodated on the Lander. Following the Rover's egress, the Humboldt station was to be activated to study the environment and measure planetary geophysics parameters important for understanding Mars's evolution and habitability. Humboldt has been removed from the mission.

The ExoMars Space Segment is composed of:

The Carrier Module (CM) is the element that carries the Descent Module Composite (DMC) from Earth to Mars orbit. It allows to wait in orbit for favourable conditions before releasing the DMC into the correct trajectory for its entry, descent and landing.

The CM provides the services (that is launcher vehicle interface, propulsion, power, etc.) necessary for the cruise and Mars orbiting phases. After releasing the DMC, the CM continues in a collision course to Mars, breaking-up and burning as it enters the Martian atmosphere.

The Descent Module Composite (DMC) is the element of the mission that performs the ballistic entry, descent and landing onto the Martian surface.

Once on the surface, the DMC deploys the Lander, which accommodates the Rover Module (RM) and the Geophysical and Environmental Payload (GEP) instruments.

The DMC is a blunt-shape entry capsule mounted on the upper side of the Carrier Module. To achieve a safe entry, descent and landing onto the Martian surface, its design includes a heatshield, parachute system, descent thrusters, reaction control system and the Lander.

The Lander features the vented airbags and the required support and egress system in order to allow the egress of the Rover and the deployment of the GEP instruments.

The ExoMars Trace Gas Orbiter, part of the 2016 ExoMars mission, will support communications.

The mission was to be launched on a NASA provided Atlas-5(551)¹ rocket, but when NASA dropped out of the mission, the baselined launch vehicle was changed to a russian provided Proton-M Briz-M.

The mission has been delayed from 2018 to 2020 due to multiple issues. In March 2020 it was decided to delay the mission to 2022 due to lack of time to test and qualify problematic parachutes and electronics vital to the spacecraft.