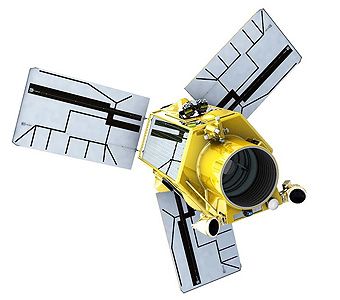 EgyptSat A (MisrSat A) is Egypt's third Earth remote-sounding satellite. The satellite is jointly built by Egypt's National Authority for Remote Sensing and Space Sciences together with RKK Energiya in Russia. The imaging payload was developed by OAO Peleng and NIRUP Geoinformatsionnye Sistemy in Belarus.

The satellite is an improved version of EgyptSat 2 and is also based on RKK Energiya's 559GK bus, which inherits technologies from their USP platform. The satellite features SPD-70 electric engines using Xenon. It features an improved opto-electronic system and onboard control system, high-speed on-board radio link and solar cells with increased efficiency.

The satellite was planned to be launched in November 2018, but was delayed to February 2019.

During the launch, stage 3 of the Soyuz-2-1b Fregat launch vehicle shut of too early due to an incorrect load of oxidizer, but apparently the Fregat-M upper stage was able to compensate the performance shortfall.