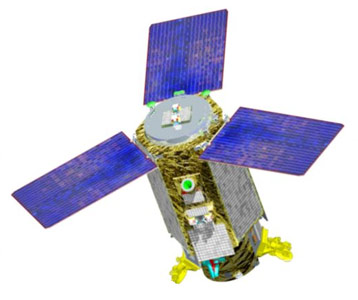 EgyptSat 2 (MisrSat 2) is Egypt's second Earth remote-sounding satellite. The satellite is jointly built by Egypt's National Authority for Remote Sensing and Space Sciences together with RKK Energiya in Russia. The imaging payload was developed by OAO Peleng and NIRUP Geoinformatsionnye Sistemy in Belarus.

The satellite is based on RKK Energiya's 559GK bus, which inherits technologies from their USP platform. The satellite features SPD-70 electric engines using Xenon.

EgyptSat-2 has a resolution of 1 m in panchromatic mode and 4 m in multispectral mode. The camera can take both single frame images or stereoscopic images and can operate in push-broom continuous imaging mode or in a cartographic mode.

The satellite was launched on a Soyuz-U booster from Baikonur cosmodrome in April 2014 into an transfer orbit (440 by 720 kilometer, 51.6°) to an unusual non sun-synchronous orbit. It circularized its orbit with its onboard ion engines.

According to industry sources, a dual failure in the flight control system caused a loss of the satellite in April 2015 after only one year in orbit.