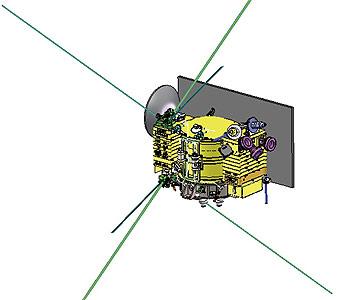 DSLWP A1 and A2 (Discovering the Sky at Longest Wavelengths Pathfinder) or Longjiang 1 and 2 are two identical Chinese lunar microsatellites mission to perform ultra long-wave astronomical observations developped at the Harbin Institute of Technology (HIT).

The 45 kg micro-satellites are to be launched piggy-back with Queqiao (Chang'e 4 Relay, but are to insert them by themselves into a 200 km × 9000 km lunar orbits. The satellites are three-axis stabilized and carry a radio-astronomy payload featuring two linear polarization antennas mounted along and normal to the flight direction, which uses the moon as a shield to avoid radio emmanations from earth. Additionally, the satellites carry a King Abdulaziz City for Science and Technology (KACST) developed micro-optical camera and a amateur radio communications system.

The mission was be launched in May 2018 on a CZ-4C rocket about 6 month in advance of the Chang'e 4 lander and rover.

Longjiang 1 apparently apparently had issues on 21 May and remained initially in earth orbit.

Longjiang 2 successfully entered lunar orbit. It operated until 31 July 2019, when it impacted the lunar surface on the far side.