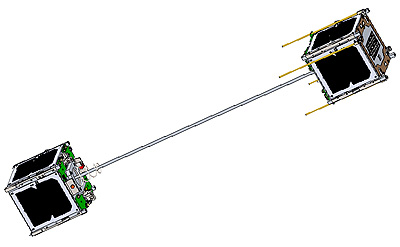 The DESCENT mission will fly a 2U-CubeSat electrodynamic tether system that will be built by the team and launched from the International Space Station (ISS) via a US launch service provider  NanoRacks. The launch will take place early 2019, depending on the availability of launch vehicle. The mission will demonstrate the feasibility of deorbiting spacecraft by EDTs. The operation and observation of CubeSat EDT deorbit process will take place over its entire orbital lifetime, which is expected to be roughly 2 months. The deployed system will consist of two 1U-CubeSats (mother and daughter satellite) connected by a 100 m long bare tape electrodynamic tether. For launch, the CubeSats will be connected together to form a 2U configuration with the EDT stowed in the daughter satellite.

After ejection from the ISS, the daughter satellite will separate from the mother satellite and extend the EDT to its full length. The deployment will be in the local vertical downward direction, and the pair will have a mean orbit altitude of 400km at the time of orbit insertion.