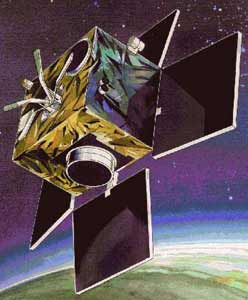 Astrid 1 is a small spin-stabilized satellite weighing 27 kg launched on 24 January 1995. It is Sweden's third scientific satellite and first microsatellite. Astrid 1 carries an Energetic Neutral Atom analyzer, an Electron Spectrometer and two UV imagers for imaging the aurora. The platform was designed and developed by Swedish Space Corporation's Space Systems Division in Solna, Sweden, while the payload was developed by the Swedish Institute of Space Physics in Kiruna.

Astrid 1 was launched together with the Russian navigation satellite Tsikada 1 from Launch Complex 132 of the Plesetsk Cosmodrome at 0354:22 UT on Jan 24, 1995 on a Kosmos-3M rocket supplied by the Design Bureau Polyot, Omsk. The Russian satellite was equipped with a special adapter for accommodating two microsatellites.