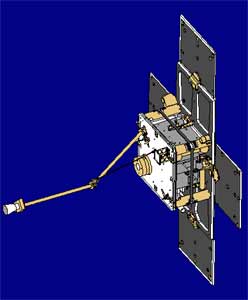 Astrid-2 is Sweden's second scientific microsatellite developed by Swedish Space Corporation's Space Systems Division in Solna, Sweden. Astrid-2 was launched piggyback on a Kosmos-3M rocket from Plesetsk on 10 December 1998. On 24 July 1999 the contact with the satellite was lost during a passage. Several attempts to re-establish the contact have been made without any results. During the 7.5 months in orbit, Astrid-2 delivered a large quantity of data to the scientists.

The scientific mission is:

The scientific payload consists of: