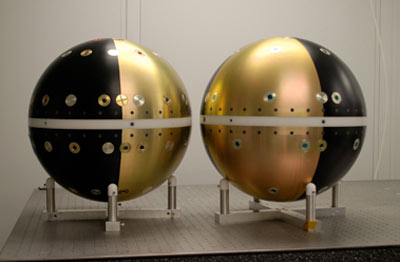 ANDE-2 (Atmospheric Neutral Density Experiment - 2) consists of two microsatellites, called ANDE Active (AA) spacecraft (Castor) and the ANDE Passive (AP) spacecraft (Pollux) launched from the Shuttle payload bay, that will measure the density and composition of the low Earth orbit (LEO) atmosphere while being tracked from the ground. The data will be used to better predict the movement and decay of objects in orbit.

The main objective of ANDE-2 is to measure the total atmospheric density between 100 and 400 km. The density data that is gathered will be used to improve orbit determination calculations of the orbits of resident space objects.

ANDE-2 consists of two spherical micro satellites. These satellites are launched from the Space Shuttle cargo bay into a circular orbit just below the International Space Station altitude.

Both satellites will be tracked by the Satellite Laser Ranging (SLR) system and the U.S. Space Surveillance Network (SSN). These satellites have the same dimensions, but have different masses. Because of the difference in mass, the satellites will drift apart over time. Observing the satellites' position will provide a study on spatial and temporal variations in atmospheric drag associated with geomagnetic activity.

ANDE-2 uses two spherical microsatellites which are launched from the Space Shuttle cargo bay. Both satellites are 19 inch diameter spheres, have a mass of 50 and 25 kg, and are constructed of aluminum. The surface of both spheres contains an embedded array of sensors including 30 retro reflectors, six laser diodes for tracking, and six photovoltaic cells for determining orientation and spin rate. Both spheres also have thermal monitor systems. The ANDE spacecraft are located inside the Internal Cargo Unit (ICU). The ICU is made of three aluminum sections. Each section is separated by a light band separation system. Once ejected from the cargo bay, the ICU will separate and deploy the ANDE spheres at a safe distance from the shuttle.