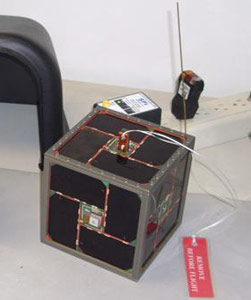 The mission is to test a GPS unit designed and built in house by NASA Johnson. Texas A&M and the University of Texas were required to build 5" cubesat spacecraft buses and support systems for the GPS units.

The satellite was deployed together with its sister satellite Bevo 1 from Space Shuttle Endeavour (STS-127), but the satellites failed to separate from each other.