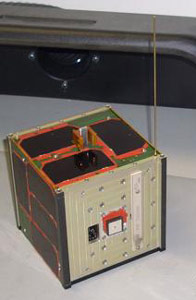 Bevo 1 is a picosat mission of the University of Texas. It is sponsored under NASA JPL's LONESTAR (Low Earth Orbiting Navigation Experiment for Spacecraft Testing Autonomous Rendezvous and Docking) program.

The mission is to test a GPS unit designed and built in house by NASA Johnson. Texas A&M and the University of Texas were required to build 5" cubesat spacecraft buses and support systems for the GPS units.

The satellite was deployed together with its sister satellite AggieSat2 from Space Shuttle Endeavour (STS-127), but the satellites failed to separate from each other.