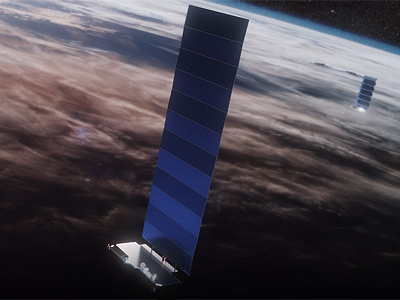 The Starlink satellites feature a flat panel design with a single solar panel and have a mass of about 227 kg for the prototype mission. The satellites are stacked for launch without the need for an dispenser. As a propulsion system for orbit adjustion and maintenance as well as deorbiting, they use krypton-fueled Hall thrusters. The Startracker navigation system is based on the heritage of Dragon. The satellites are designed autonomously avoid collisions based on uplinked tracking data. At the end of life, the Starlink satellites are to be actively deorbited, leading to reentry. 95% of the material is expected to burn up.

The first 1584 Starlink satellites are to operate from a 550 km orbit. Later sub-constellations are planned for 1200 km and very low 340 km orbital altitude, bringing the final constellation size to nearly 12000 satellites.

The initial 75 satellites, called Block v0.9, are prototypes without inter-satellite links and Ka-band antennas. These are to be used for extensive testing of deployment and operation and also of deliberate deorbiting.

For launch, 60 satellites are stacked on top of each other without the need of a massive deployer. 60 satellite is the maximum possible to fit inside the Falcon-9 v1.2 (Block 5), although a future enlarged fairing will allow launches of more than 60 satellites per mission.

Note: It has been reported, that SpaceX will not be releasing individual names for the Starlink satellites. Therefore on this website the satellites will be designated by a prefix flight number and a number in catalog order, as long as no individual names are released.