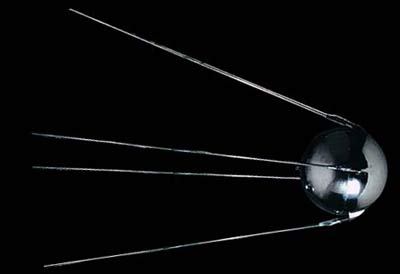 Originally, the complex scientific satellite D-1 was planned to be the first satellite, but as the development of this spacecraft was delayed, Segei Korolev decided in February 1957 to accelerate the first orbital launch by building two "simple satellites". The first of these, PS 1, was designed by Mikhail Khomyakov.

The 83.6 kg satellite consisted of a 58 cm pressurized, highly polished aluminium shell, which contained two 1 W transmitters, three silver-zinc-batteries and one ventilator. The transmitters were connected to four whip antennas mounted at an angle of 70°. two of these had a length of 2.4 m, the other two were 2.9 m long.

There were no scientific instruments on board, but the transmitters changed their transmission pattern, if the temperature of the interior of the satellite went outside the nominal range between 0° and 50°C or if the internal pressure dropped below a value of 0.35 atm due to micrometeroid impact.

Sputnik 1 was successfully launched on 4 October 1957 at 19:28:34 GMT. The performance of the launch vehicle was slightly lower than expected, resulting in an orbit of 228 km, an apogee of 947 km, and an orbital inclination of 65.1 degrees with an orbital period of 96.17 minutes. The satellite worked for 21 days. Sputnik 1 reentered the atmosphere and burned up on 4 January 1958.