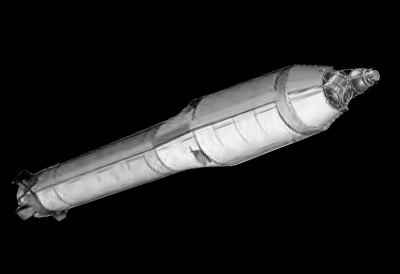 PS 2 (Prostreishiy Sputnik 2), better known as Sputnik 2, was the world's second artificial satellite and the first to carry an animal into orbit.

PS 2 was one of the two simple payloads to be orbited before the more complex D-1 satellite was ready. PS 2 had the primary goal to launch a living animal into orbit, but recovery was not planned.

The PS-2 satellite consisted of three units mounted in a conical frame, with a total mass of 508 kg. On top was an experiment container, which carried instruments to measure solar x-ray and far ultraviolet radiation. The medium unit was a sealed spherical shell, which was essentially the same as the original PS-1 and contained the batteries and transmitters. Below that was a cabin to carry an experimental dog. This cabin was derived from the systems flown on the R-2A suborbital rockets. Unlike the earlier system, it was not designed to reenter the earth atmosphere, so it was accepted, that the dog carried on this flight would die, when the system runs out of consumables (air and water) after about 7 days.

The aluminum dog cabin was 80 cm long and 64 cm in diameter. A ventilator fan at the top was used to control the temperature. On either side of the dog, two large compartments contained plates of potassium superoxide, which reacts with carbon dioxide and water vapor and emits oxygen.

Food and water were simultaneously provided by a gelatinous nutrient made from water, agar agar, dried-bread powder, powdered meat and beef tallow. This was delivered by dispenser in portions for the dog to eat at regular intervals. A 3 liter supply was meant to last seven days, which was also how long oxygen regeneration would last. Urine and feces were collected by a tight fitting bag.

The mission was successfully launched on 3 November 1957 and reached a 212 km × 1660 km orbit inclined by 65.3°. Lifesigns of Laika were transmitted during launch and the first few orbits, but Laika died after a few hours in orbit from overheating and stress.

The solar x-ray experiment provided data, but appeared to be jammed by intense radiation that had no connection with the direction of the Sun. The project sicientists found no explanation and did not publish the results. Therfore the Van Allen radiation belts were discovered a few month later by the US Explorer 1 satellite.

Six days after the launch, on 10 November 1957, Sputnik-2 exhausted its batteries and ceased transmitting data. Sputnik 2 reentered Earth's atmosphere on 14 April 1958 after 162 days in orbit.