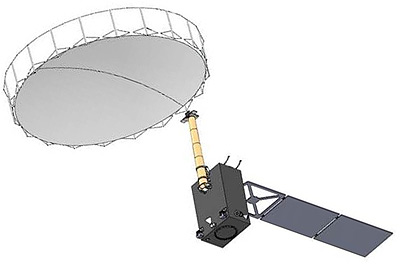 The satellites will feature a secure space-based system of data centers, interconnected by Laser communication links. Data transfer from and to the ground will be relayed via geostationary satellites. According to Cloud Constellation, the deployment of satellite-based secure storage will protect critical data from unauthorized access while supporting global communications at reduced latency of todays multi-hop networks.

The constellation was originally to feature initially 12 satellites of about 400 kg, but may grow to 40.

In September 2017, the company signed an agreement with Virgin orbit to launch the initial constellation of 12 satellites on dedicated LauncherOne rockets from 2019 onwards in radpid cadence. After the redesign, the satellites outgrew the LauncherOne performance, requiring a shift to another launch vehicle.

During a redesign, the capabilities and weights of the satellites were increased, but the initial constellation size was reduced to eight. Three of these were to be memory satellites with 5 petabytes of storage available, and five were to be relay satellites. The data was be replicated on each of the three satellites for built-in redundancy to help protect against the loss of connection to a satellite.

In May 2019, LeoStella, a joint venture of Thales Alenia Space and Spaceflight Industries, was selected to build the satellites with the contzract to be signed in September 2019. Now the initial constellation will consist of 10 identical satellites of 230-240peta kg each to be placed in a low 650-700 km low inclination orbit. Third-party satellites in geosynchronous Earth orbit (GEO) will provide the connections to Cloud Constellations proprietary data terminals on the ground. Such a system combines the accessibility of GEO satellites with the low cost of LEO satellites.

An Arianespace Vega-C rocket has been baselined to put the ten satellites in 2021 into orbit on a single launch.