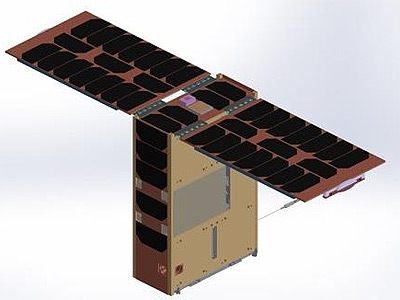 SNIPE (Small scale magNetospheric and Ionospheric Plasma Experiment) or KASI-SAT (Korea Astronomy and Space Science Institute Satellite) is a south Korean mission for identifying temporal and spatial variation of small scale plasma structures in the ionosphere and magnetosphere. It is a constellation consisting of four 6U CubeSats operating in variable spaced formations from 10 km to 100 km.

During the mission lifetime of 6 months the SNIPE constellation will gradually change the inter-satellite distance and the flight formation, which is realized by cold gas thrusters onboard. The main target of the SNIPE mission is to resolve small-scale (<200 km) structures of ionospheric plasma and high-energy particles as well as the concomitant perturbations of geomagnetic field. The bus and payload data will be downloaded in the UHF and S-band frequencies. As a secondary and indirect data link to the ground, the SNIPE will also carry Iridium modules.

The SNIPE satellites will be launched in 2020 as a secondary payload on a Russian Soyuz-2-1a Fregat rocket into a polar circular orbit at an altitude of ~500 km.