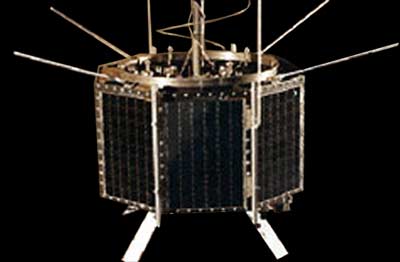 RadCal (Radar Calibration) is small satellite to calibrate the Space Command radars to determine orbital positions of other satellites to within a few meters.

RadCal is an axially symmetric, gravity-gradient stabilized spacecraft which was launched on June 25, 1993. It was the first satellite dedicated to RPM (Radar Performance Monitoring) with the objective of providing calibration data for numerous DoD (Department of Defense) C-band radar systems distributed around the world. The spacecraft had a mass of 89.3 kg, a bus height of 40.6 cm, a diameter of 76.2 cm. The gravity gradient boom had a length of 6.069 meters.

RadCal carries two C-band transponders, a dual-frequency Doppler beacon transmitting at 150 and 400 MHz, and a tracking, telemetry, and control unit. In an effort to standardize the procedures required to make use of a GPS-based system as a backup orbital determination system, two Trimble TANS Quadrex, non-military GPS receivers were also put onboard as a secondary, experimental payload.

Commissioned under a one-year contract-to-launch schedule, RADCAL is currently (2011) operating over 15 years past its expected lifetime and has had higher power degradations over the years. With the Hooponopono nanosat, a replacement was launched in 2013, but failed to operate.