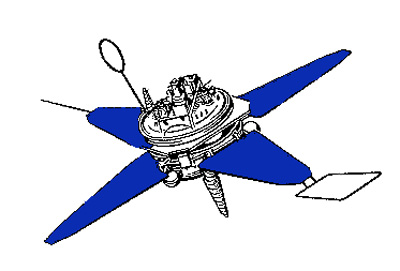 Prognoz or SO- is a series of soviet research satellites to study processes of solar activity, their influence on interplanetary environment and the Earth magnetosphere.

The Prognoz spacecraft, built by Lavochkin, consists of a hermetically sealed cylinder-shaped mainframe of 2 m diameter and 0.925 m height with spherical caps, which houses the instrumentation and equipment. The sensors and scientific instrumentation was installed on the outside surface of the main body. Power supply was provided by four solar panels unfolding in orbit with a 6 m span and batteries. The satellite featured an active temperature control system with the side surfaces of the hermetically sealed body is used as a radiator. The mass of the SO satellites was 845 kg.

The satellites were spin-stabilized with the spin axis pointed towards the Sun, and were repointed every few days by cold gas thrusters using compressed nitrogen.

All satellites were launched by Molniya-M (Blok-SO-L) rockets into highly elliptical orbits.