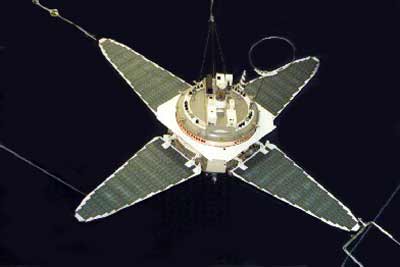 Prognoz or SO-M is a series of soviet research satellites to study processes of solar activity, their influence on interplanetary environment and the Earth magnetosphere.

The SO-M series was a follow on to the original Prognoz SO series.

The Prognoz spacecraft, built by Lavochkin, consists of a hermetically sealed cylinder-shaped mainframe of 2 m diameter and 0.925 m height with spherical caps, which houses the instrumentation and equipment. The sensors and scientific instrumentation was installed on the outside surface of the main body. Power supply was provided by four solar panels unfolding in orbit with a 6 m span and batteries. The satellite featured an active temperature control system with the side surfaces of the hermetically sealed body is used as a radiator. The mass of the SO-M satellites was in the range from 900 kg to 1050 kg.

The satellites were spin-stabilized with the spin axis pointed towards the Sun, and were repointed every few days by cold gas thrusters using compressed nitrogen.

All satellites were launched by Molniya-M (Blok-SO-L) rockets into highly elliptical orbits.

Prognoz 9 was launched into a 480 km × 700000 km, 65° orbit. It included the Relikt-1 experiment to investigate the anisotropy of the cosmic micropwave background at 37 GHz, using a Dicke-type modulation radiometer. During 1983 and 1984 some 15 million individual measurements were made (with 10% near the galactic plane providing some 5000 measurements per point). The entire sky was observed in 6 months. The angular resolution was 5.5°, with a temperature resolution of 0.6 mK. Additionally it observed gamma flares in deep space, and solar corpuscular and electromagnetic radiation plasma flows and magnetic fields in circumterrestrial space to determine the effects of solar activity on the interpl anetary medium and the earth's magnetosphere.

Prognoz 10, also known as Interkosmos 23, was launched into a 5975 km × 194734 km, 65° orbit to investigate the structure of interplanetary and circumterrestrial shock waves generated by the interaction of the solar wind and the earth's magnetosphere. Special focus was the boundary and the bow shock and how particles leaked from the bow shock into the magnetosphere. It carried scientific instuments developed by scientists and specialists of the USSR and the Czechoslovak Socialist Republic as part of the Interkosmos program of international space cooperation.