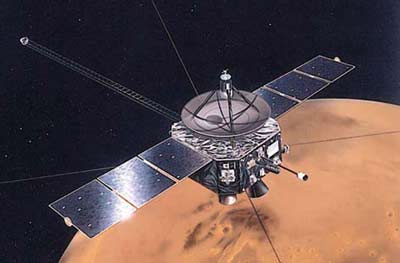 The primary scientific objective of Nozomi program is to study the Martian upper atmosphere with emphasis on its interaction with the solar wind.

The orbit of the Nozomi spacecraft around Mars will be an elliptical one with periapsis altitude of 150 km and apoapsis distance of 15 Mars radii. The low periapsis altitude is chosen to probe the ionosphere as low as possible and relatively large apoapsis distance is to study the night side of Mars where detection of ionospheric ions is expected.

Nozomi was launched with M-5 [KM-V1] rocket at Kagoshima Space Center (KSC) on 4 July 1998. During orbiting the earth for 4 months, Nozomi made its first lunar swing-by on September 24. Then it made the second lunar swing-by on December 18, and executed a powered earth swing-by two days later. The earth swing-by was to send Nozomi onto a transfer orbit to Mars.

Due to malfunction of a thruster valve during the powered earth swing-by, however, the Nozomi flight control team had to send an uplink command again to get it back on the right trajectory to Mars. As a result of this second maneuver, the Nozomi team found that Nozomi no longer had enough fuel to inject itself into its scheduled orbit on arrival at Mars.

The mission analysis team managed to find an alternative trajectory to meet both fuel and observation conditions. Thus the orbit insertion that was scheduled in October 11, 1999, was abandoned, and a new trajectory strategy was established. For the moment, Nozomi's arrival at Mars is scheduled early in 2004 through two more earth swing-bys in Dec. 2002 and June 2003.

In Dec. 2003, when the probe was to insert itself into Mars orbit, all fuel was used up on this attempt, preventing the probe from entering orbit. Inspite of the failed Mars mission, Nozomi remains in an heliocentric orbit to continue monitoring solar activity.