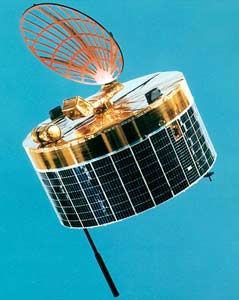 Suisei (the Japanese name meaning `Comet') was launched on 18 August 1985 into heliocentric orbit to fly by Comet 1P/Halley. It is identical to Sakigake apart from its payload: a CCD UV imaging system and a solar wind instrument. The main objective of the mission was to take UV images of the hydrogen corona for about 30 days before and after Comet Halley's descending crossing of the ecliptic plane. Solar wind parameters were measured for a much longer time period. The spacecraft is spin-stabilized at two different rates (5 and 0.2 rpm). Hydrazine thrusters are used for attitude and velocity control; star and sun sensors are for attitude control; and a mechanically despun off-set parabolic dish is used for long range communication.

Suisei began UV observations in Nov. 1985, generating up to 6 images/day. The spacecraft encountered Comet P/Halley at 151,000 km on sunward side during 8 March 1986, suffering only 2 dust impacts.

Fifteen burns of Suisei's 3 N motors over 5--10th of April 1987 yielded a 65 m/s velocity increase for a 60,000 km Earth gravity assist swingby on 20 August 1992, although the craft was then lost behind the Sun for the summer. The hydrazine was depleted on 22 February 1991. Preliminary tracking indicated a 900,000 km flyby had been achieved. ISAS had decided during 1987 to guide Suisei to a Nov. 24, 1998 encounter with P/Giacobini-Zinner, but due to depletion of the hydrazine, this, as well as plans to fly within several million kilometers of Comet P/Tempel-Tuttle on Feb. 28, 1998 has been cancelled.