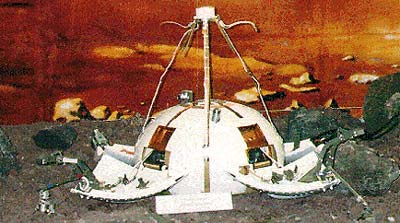 The Mars 96 spacecraft was launched into Earth orbit, but failed to achieve insertion into Mars cruise trajectory and re-entered the Earth's atmosphere at about 00:45 to 01:30 UT on 17 November 1996 and crashed within a presumed 320 km by 80 km area which includes parts of the Pacific Ocean, Chile, and Bolivia. The cause of the crash is not known.

The Russian Mars 96 mission was designed to send an orbiter, two small autonomous stations, and two surface penetrators to Mars to investigate the evolution and contemporary physics of the planet by studying the physical and chemical processes which took place in the past and which currently take place. The Mars 96 Orbiter was a 3-axis sun/star stabilized craft based on the Fobos design with two platforms for pointing and stabilizing instruments. The propulsion units were mounted on the bottom and two large solar panels extended out from opposite sides of the craft. The two penetrators were mounted on the bottom by the propulsion system, the two small stations were connected on top of the spacecraft, and a dish antenna extended off one of the sides perpendicular to the solar panels. The Mars 96 spacecraft had a launch mass (including propellant) of 6180 kg.

Mars 96 was scheduled to arrive at Mars on 12 September 1997, about 10 months after launch, on a direct trajectory. About 4 to 5 days before arrival the small surface stations would have been released. The orbiter was to go into an elliptical 3-day transfer orbit about Mars, and the two penetrators to descend to the surface during the first month of orbit. The final orbit would have been a 14.77 hour elliptical orbit with a periapsis of 300 km.

The two Mars 96 Penetrators were mounted on the bottom of the orbiter near the propulsion system. The penetrators were long thin cylinders, pointed at the bottom, or forebody, and with a widened, funnel-shaped top. Instruments were contained inside throughout the length of the cylinder. The scientific objectives of the penetrator experiments were to obtain images of the surface, study Martian meteorology, examine the physical, chemical, magnetic, and mechanical properties of the Martian regolith, including its water content, collect data on the magnetic field, and record seismic activity.

After orbit insertion, adjustment to 300 km periapsis, and 7 to 28 days of orbital maneuvers, the orbiter would be properly oriented and the first penetrator would be spun about its long axis and released. When the penetrator had moved away from the orbiter, its solid rocket motor was to ignite and put it into an atmospheric entry trajectory. Entry would occur 21 to 22 hours later. The penetrator was to enter the atmosphere at about 4.9 km/sec at an angle 10-14 degrees. The probe would first be slowed aerodynamically, followed by inflation of a braking device. The penetrator was to strike the surface at approximately 80 m/s. The forebody would separate on impact and can penetrate 5 to 6 meters into the ground, attached by wires to the aftbody, the top of the aftbody remaining above the surface. The plan called for the first penetrator to land near the site of one of the surface stations, and the second to land at least 90 degrees away. Both penetrators could have been released on the same orbit.

The penetrator was equipped with instruments in both the forebody and aftbody. The forebody held a seismometer, accelerometer, thermoprobe, neutron detector, and an alpha-proton-X-ray spectrometer. The aftbody contained a gamma-ray spectrometer and thermoprobe within the part of the cylinder underground, and meteorology sensors, a magnetometer, a television camera, and transmitter exposed at the top. The experiments were to begin after landing. Data was to be transmitted to the orbiter and then relayed to Earth. The penetrators have an expected lifetime of 1 year.

The small station was contained inside a cylindrical aeroshell approximately 1 meter in diameter and 1 meter high with a mass of 25.5 kg for a total mass (station plus aeroshell) of 33.5 kg. Each station was to enter the atmosphere at a velocity of less than 5.75 km/s at an entry angle between 10.5 and 20.5 degrees and an entry azimuth between 115 and 145 degrees. The aeroshells were to be shed before landing and parachutes will be used to slow the descent. On landing the station covering would open into four triangular petals which extending approximately 30 cm from the central base.

The station was to study the vertical structure of the atmosphere and take images during its descent. On the surface it would have a meteorology station mounted approximately 1 meter above the base of the station to study diurnal, seasonal, and annual variations in the atmosphere. A magnetometer would have extended from one of the petals to measure the planet's surface magnetic field and its variation with time. A seismometer would collect data on the seismic environment. An Alpha-Proton-X-Ray spectrometer would extend from one petal and measure the elemental composition of the surface. An oxidant sensor, extending from a third petal, was to measure oxidant abundances. A panoramic camera is mounted on a mast on the base of the station. The stations were planned to have an active lifetime of about 700 days (approximately 1 Martian year) on the surface.

The station was to be powered by two radio-isotope thermogenerators (RTG's), a battery, and a secondary power source. The surface station was equipped with a transmitter to radio data back to the orbiter for return to Earth, and a receiver to download commands from Earth via the orbiter.