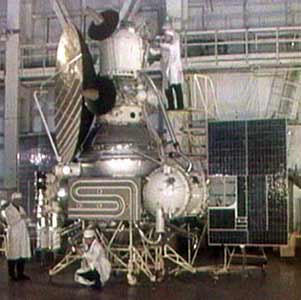 The Mars 69 was a soviet attempt of a Mars orbiter. It was developed by NPO Lavochkin.

Originally, Mars 69 was to be based on the Luna Ye-8 landing stage, but during development, it was changed to a dedicated design just 13 months before the scheduled launch. Originally they would have carried also a lander, but this was abandoned due to lack of time to test the systems from high altitude balloons. The orbiter carried a film-based imaging system capable of taking 160 images of the Martian surface. The hastily built orbiters were delivered for launch in 1969, not without doubts of their success.

The probes would have conducted two trajectory correction maneuvers, one 40 days after launch and the second about 10-15 days before reaching Mars. The probes would then have entered a highly elliptical Mars orbit reaching from 1000 km to 70000 km.

The first orbiter, M-69 №521, was launched on 27 March 1969 on a Proton-K Blok-D rocket. A failure of the third stage's propulsion system prevented this mission from reaching space.

Only a few days later, the second orbiter, M-69 №522 lifted off on its on a Proton-K Blok-D launch vehicle. This time, one of the six stage one engines malfunctioned causing the rocket to crash after a flight of 30 seconds.

A third orbiter was apparently built, but never launched.