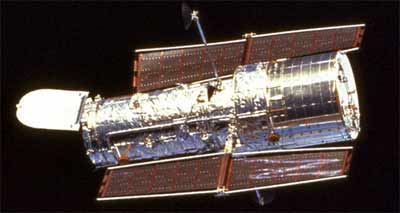 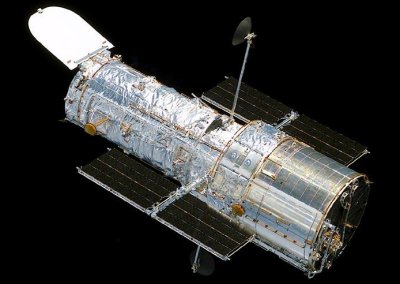 The HST (Hubble Space Telescope) was the first and flagship mission of NASA's Great Observatories program. Designed to complement the wavelength capabilities of the other spacecraft in the program (CGRO, AXAF, and SIRTF), HST was a 2.4 m, f/24 Ritchey-Chretien telescope capable of performing observations in the visible, near-ultraviolet, and near-infrared (1150 A to 1 mm).

Placed into a low-earth orbit by the space shuttle, HST was designed to be modular so that on subsequent shuttle missions it could be recovered, have faulty or obsolete parts replaced with new and/or improved instruments, and be re-released. HST was roughly cylindrical in shape, 13.1 m end-to-end and 4.3 m in diameter at its widest point.

HST used an elaborate scheme for attitude control to improve the stability of the spacecraft during observations. Maneuvering was performed by four of six gyros, or reaction wheels. Pointing could be maintained in this mode (coarse track) or the Fine Guidance Sensors (FGSs) could be used to lock onto guide stars (fine lock) to reduce the spacecraft drift and increase the pointing accuracy.

Power to the two on-board computers and the scientific instruments was provided by two 2.4 × 12.1 m solar panels. The power generated by the arrays was also used to charge six nickel-hydrogen batteries which provided power to the spacecraft during the roughly 25 minutes per orbit in which HST was within the Earth's shadow.

Communications with the satellite were maintained with the TDRS satellites. Observations taken during the time when neither TDRS was visible from the spacecraft were recorded on tape recorder and dumped during periods of visibility. The spacecraft also supported real-time interactions with the ground system during times of TDRS visibility, enabling observers to make small offsets in the spacecraft pointing to perform their observations. HST was the first scientific spacecraft designed to utilize the full capabilities of TDRSS, communicating over either multiple-access or single-access channels at any of the supported transmission rates.

HST was operated in three distinct phases. During the first phase of the mission (Orbital Verification or OV), responsibility for the spacecraft was given to Marshall Space Center. OV consisted of an extended, eight-month checkout of the spacecraft, including test of the on-board computers, pointing control system, solar arrays, etc. This phase was followed by the Science Verification (SV) phase, lasting nearly another year, during which each of the six science instruments was tested to verify their capabilities and set limits on their safe operations during the remainder of the mission. Responsibility for the spacecraft during SV was given to Goddard Space Flight Center. The last phase of the mission, known as the General Observer (GO) phase, was planned to last from the end of SV through the end of the mission and was the responsibility of the Space Telescope Science Institute. General observations were phased in gradually, however, during the SV phase because the OV and SV portions of the mission were considerably longer than expected prior to deployment.

The mission was troubled soon after launch by the discovery that the primary mirror was spherically aberrated. In addition, problems with the solar panels flexing as the spacecraft passed from the Earth's shadow into sunlight caused problems with the pointing stability. Steps were taken to correct these problems, including replacement of the solar panels, replacement of the Wide Field and Planetary Camera with a second-generation version with built-in corrective optics, and replacement of the High-Speed Photometer with COSTAR (Corrective Optics Space Telescope Axial Replacement) to correct the aberration for the remaining instruments.