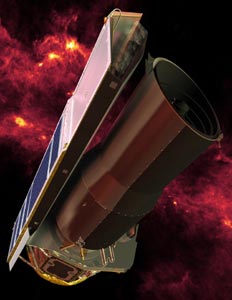 The SIRTF (Space Infrared Telescope Facility) is a 1 meter class, cryogenically cooled space telescope operated as an observatory for infrared astronomy in the 3 - 180 micron range. The observatory is the final element of NASA's four Great observatories. The main objectives of the mission are:

The spacecraft consists of an octagonal bus structure, and a solar array to power the science instruments. The pointing contron subsystem employs a celestial-inertial, three-axis stabilized control system. SIRTF is planned to have an Earth-trailing Heliocentric orbit.

Unlike IRAS (Infrared Astronomical Satellite), which swept rapidly across the sky, SIRTF will be a true observatory, carrying a variety of focal plane instruments. The SIRTF telescope is a lightweight reflector of Ritchey-Chretien design.

The instrument sensitivity is expected to be increased by a factor of 100 to 1000 over that of IRAS, and the spatial resolution will be at least a factor of 10 times finer than IRAS.

SIRTF has been renamed Spitzer Space Telescope (SST) in December 2003.

Spitzer ran out of liquid helium coolant on 15 May 2009, which stopped far-IR observations. Only the IRAC instrument remains in use, and only at the two shorter wavelength bands (3.6 µm and 4.5 µm). The telescope equilibrium temperature is now around 30 K (-243 °C), and IRAC continues to produce valuable images at those wavelengths as the "Spitzer Warm Mission".

Spitzer will be deactivated on 30 January 2020, effectively ending its mission more than 16 years after its launch. The mission is terminated because Spitzer is drifting far enough away from the Earth to complicate spacecraft operations, and making it impossible to operate it effectively. Much of the infrared astronomy that Spitzer had been doing will be continued by the upcoming JWST and NGRST (Nancy Grace Roman Space Telescope, WFIRST) observatories.