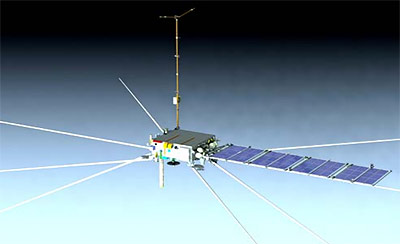 Ionosfera is a constellation of four ionospheric and magnetospheric research satellites developed by for Roskosmos for the project Ionozond.

The space segment of project Ionozond includes fonsists of four Ionosfera and one Zond satellite. The constellation of Ionosfera satellites is designed for the operational monitoring of the magnetosphere and ionosphere, while Zond measures the solar irradiadion.

The Ionosfera satellites operate on circular sun-synchronous orbits (SSO), with a height of about 800 km and located in two orbital planes (two satellites in each plane). Satellites in each plane will be separated by an angle 180°±30°. One of the planes of the orbits is located in the plane of the Earth's terminator ("Terminator" subconstellation), and the second - at an angle of approximately 90° to the terminator ("Meridian" subconstellation).

The Zond satellite was supposed to fly with the Ionosfera satellites in 2020 to observe the Sun, but work on it has been suspended due to for lack of funding.

The first two Ionosfera satellites are now planned for a launch in 2021.