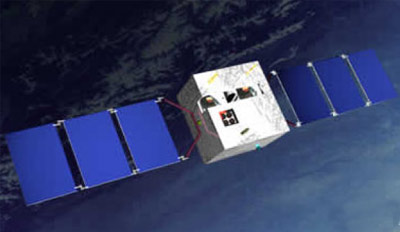 HY 1 (Haiyang = Ocean) is the first operational remote sensing satellite based on the CAST968 bus. The 365 kg box-shaped satellite is three-axis-stabilized and Earth-oriented, with the twin solar wings oriented to the sun. It incorporates an integrated on-board operation management system and has a design life of two years. Its payloads include a 10-band ocean color scanner with a revisit period of 3 days and a 4-band CCD imager with a revisit period of 7 days.

HY-1 can provide real-time observations of China's coastal regions such as the Bohai Sea, the Huanghai Sea, the Donghai Sea, the Naihai Sea and other seacoast regions. Remote sensing data on the rest of the world can be stored in the onboard data storage device for delayed replay.

HY-1A had been launched by a CZ-4B launch vehicle from Taiyuan Satellite Launch Center on 15 May 2002. An improved HY-1B followed in 2007 on a dedicated CZ-2C (3) launch vehicle.

Two improved satellites, HY 1C and HY 1D feature an improved coastal scanner with a resolution of 50 m and two new instruments - an ultraviolet imager and a calibration spectrometer. Additionally they carry an AIS system for ship tracking.