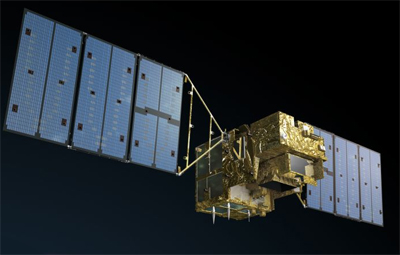 GOSAT (Greenhouse Gases Observing Satellite) is a satellite that aims to contribute to these treaties by monitoring the distribution of the density of carbon dioxide, which is one Greenhouse gas. GOSAT is a project that has been jointly developed by JAXA and Japan's Ministry of the Environment. JAXA is responsible for the development of the satellite itself and an observing sensor, while the ministry is mainly in charge of the utilization of the data obtained. GOSAT is scheduled to be launched 2009. The Name Ibuki has been selected in October 2008 as the nickname for the GOSAT mission.

So far, the number of ground-based carbon dioxide observation points has been limited, and they have been distributed unequally throughout the world. GOSAT will enable the precise monitoring of the density of carbon dioxide by combining global observation data sent from space with data obtained on land, and with simulation models. In addition, observation of methane, another Greenhouse gas, has been considered.

Furthermore, the installment of the Stratospheric Wind Interferometer for Transport Studies (SWIFT), developed by the European Space Agency (ESA), has been studied. This sensor can monitor wind speeds and the amount of ozone in the stratosphere, enabling observation of the ozone layer on a global scale.

The design of GOSAT has been changed to two solar panels for higher redundancy, as the single Panel of ADEOS 2 lead to the total loss of this satellite.