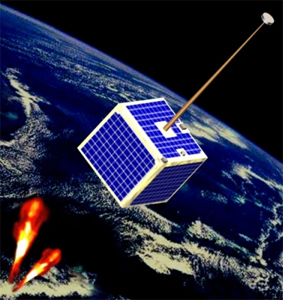 SpriteSat is an Earth observation satellite built by the Tohoku University located in Sendai, Japan. The space mission is to monitor Sprites (lightning effects) phenomenon in the upper atmosphere. It is approximately 50 kg and was launched in mearly 2009 as a piggy-back payload on a Japanese H-2A-202 rocket to a 600 km sun synchronous orbit.

After reaching orbit, SpriteSat 1 has been renamed Raijin, but failed after only 12 days.

The Rising 2 project reflew the mission on a slightly modified spacecraft in May 2014.