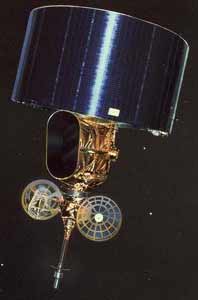 The GMS (Geostationary Meteorological Satellite) built by Hughes Space and Communications Company (HSC) for Japan have provided uninterrupted monitoring of weather conditions since 1977 over more than 65 million square miles of the Pacific Basin - about one-third of the Earth's surface.

With Nippon Electric Company (NEC) Corporation of Tokyo as the prime contractor to Japan's National Space Development Agency (NASDA), HSC was the major subcontractor responsible for the development and integration of the spacecraft. The satellites were built at HSC's Integrated Satellite Factory in El Segundo, Calif. The Japanese Meteorological Agency (JMA) is the end user and is responsible for operations.

In addition, GMS is an important link in the World Weather Watch, described by meteorologists as the most detailed study of the Earth's atmosphere ever attempted. Approximately 145 countries contribute daily surface and atmospheric measurements to the effort.

GMS-2 and GMS-3 were launched, respectively, 11 August 1981, and 3 August 1984, from Tanegashima Space Center in southern Japan. Both were carried aloft by the Japanese N-2 Star-37E booster.

GMS-5 was launched from Tanegashima aboard the new Japanese H-2 + SSB booster on 18 March 1995. GMS-4 now serves as a backup asset.

All satellites in the GMS series operate at 140° East longitude in geosynchronous orbit 36,000 km above the equator in line with Japan.

The principal instrument on board all satellites in the GMS series is the visible and infrared spin scan radiometer (VISSR), which is produced by Hughes' Santa Barbara Research Center. The spacecraft body carries the VISSR and spins at 100 rpm, while the antennas are despun and remain pointed toward Earth.

The spinning motion of the satellite carries the west-east scan. The north-south scan is produced by the VISSR scan mirror, which steps approximately 0.008° with each satellite revolution.

The VISSR senses radiation and produces images of Earth and its atmosphere one scan line at a time, similar to the way television images are generated. About 2500 scan mirror steps or line scans are required to make a full image of the portion of Earth's disk as seen by the satellite. With its specially designed optical telescope and detectors, the VISSR obtains a complete 20° by 20° scan, produces an image of the full Earth disk every 25 minutes, and transmits that image back to Earth as weather facsimile pictures, showing different portions of the hemisphere. This enables meteorologists to identify, monitor, and track cataclysmic weather events such as windstorms, heavy rainfall, and typhoons, and to predict weather dangers long before storms reach densely populated areas.

Unlike its predecessors, which carried one infrared channel each, GMS-5 carries three. Two perform the same function as the single infrared on the previous satellites. The third determines atmospheric water vapor distribution.

Many aspects of weather that affect the daily lives of people exist for such relatively short periods that polar-orbit weather satellites fail to observe them. However, the GMS, from its stationary vantage point of constant observation, acquires almost instantaneous information on rapidly changing weather patterns and regional weather phenomena.

GMS-2 through 4 also carry a space environment monitor, developed by NEC, which is used to investigate energetic particle activity emanated by the sun and to assist in studying the effect of extreme solar activity on Earth's telecommunications systems. The monitor detects solar protons, alpha particles, and solar electrons.

GMS-5 carries an experimental payload to relay search and rescue UHF emergency beacons and data from aircraft and ships in distress to land and sea rescue parties.

In addition to providing Earth images, the satellites serve as geostationary repeaters. Weather data is collected from transmitters on the ground, on the high seas, and in aircraft, and is distributed to meteorological centers. GMS also allows remote monitoring of islands, oceans, mountainsides, and other such areas not equipped with weather observation stations.

Data from collection platforms are placed in remote areas and on ships, buoys, aircraft, and miscellaneous weather stations. The platforms are invaluable in regions prone to natural disasters. For example, information collected from remote data buoys is monitored to provide early warning of impending tidal waves. In colder climates, data is used to track annual snowfall and predict water runoff in the spring. The platforms also are used to measure water levels along riverbanks to assist with flood control.