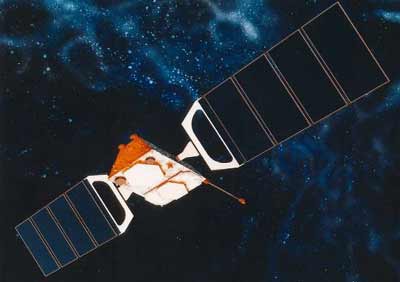 The Globalstar global mobile communications network offers global, digital real time voice, data and fax via a constellation of 48 minisatellites. The constellation operates in a 1410 km orbit inclined at 52 degrees, and will also have 8 spares. The satellites were built by Space Systems Loral and Alenia Aerospazio in Rome, Italy.

The satellites are based on the SS/Loral LS-400 platform, with the body is trapezoidal in shape with two deployed solar panels, in order to allow multiple satellites to be carried on the same launch. The satellite is 3-axis stabilized and employs magnetometers on a deployable boom, sun sensors, GPS as attitude sensors, and carries two deployable solar arrays delivering 1100 W for normal operations. The propulsion system employs hydrazine, and its primary use is station keeping. Each satellite weighs 450 kg, with a dry mass of 350 kg, and is designed for a 7.5 year lifetime. The payload antennas are phased arrays mounted on the satellite body. The Attitude control, orbit control and solar panels were delivered by Dornier (Ger).

Globalstar has been launched in clusters using Delta-7420-10C, Zenit-2, and Soyuz-U Ikar.

Spacecraft are operated from a San Jose Ca. control centre, and more than 60 further stations support the system as gateways, which cover a radius of approximately 2000 km. Fixed and vehicle mounted terminals are supported by the system, as well as standard hand-held phones.

Operational service was started in the third Quarter of 1999.