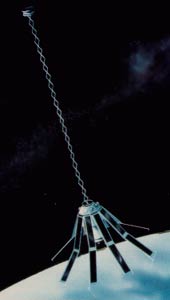 The Geosat (GEOdetic SATellite) was a dedicated US Navy military oceanographic satellite consisting of a radar altimeter designed to obtain closely spaced, precise mapping of the earth's geoid over the ocean. On 8 November 1986, the satellite was moved into an Exact Repeat Mission (ERM) orbit with a repeat cycle of 17.05 days. The Geosat mission was originally managed by the Office of Naval Research (ONR). During the development phase, the program responsibility was transferred to the Naval Electronics Systems Command, now called the Space and Naval Warfare Systems Command (SPAWAR) in Washington, D.C. The Applied Physics Laboratory (APL) was the prime contractor for the spacecraft and radar altimeter and performed spacecraft command and control operations and collected the satellite data. The data was distributed to the Naval Surface Weapons Center (NSWC), the Naval Ocean Research and Development Activity (NORDA), and NOAA. An arrangement was made with the National Ocean Service of NOAA to obtain the classified Geosat geophysical data records (GDR) providing wind, wave and sea-level products and made available to the user community. NASA obtained Geosat data for extensive waveform modeling and ice sheet research.

The basic structure of the Geosat is similar to the GEOS-3 satellite: The design consists of a conical structure below the core for the structural attachment of the velocity control system. The Geosat attitude control subsystem was designed to point the radar altimeter to within 1 degree of nadir 98 percent of the time. The system components were a 20-foot scissors boom with 100-pound end mass, redundant momentum wheels for roll and yaw stiffness, and pitch and roll attitude control thrusters. Attitude sensing was provided through the use of three digital sun-attitude detectors and a three-axis vector magnetometer. Spacecraft command was accomplished via a VHF uplink from the APL ground station. The telemetry subsystem consisted of two S-band transmitters, two tape recorders, and two encryption units. The Geosat was equipped with two Odetics dual-track high-density tape recorders that independently recorded the 10.205 kbps telemetry stream and played it back at 833 kbps for transmission to the ground. The Geosat also included redundant Doppler beacons for continuous tracking by a network of ground stations within the Defense Mapping Agency (DMA) and for a source of accurate timing to the radar altimeter and the telemetry subsystem. A C-band transponder was also included on Geosat.

Geosat operated until January 1990. The mission was continued by the GFO satellite, which was launched in 1998.