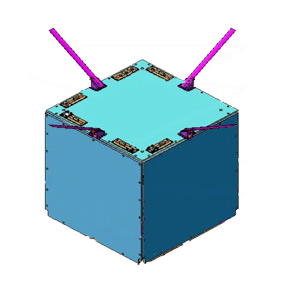 D-Sat (Dosimeter Satellite) is an in-house, small spacecraft programme of ATSB. The programme was initiated as a platform for engineers to have direct hands on experience as well as confidence in the design, manufacturing, assembly and testing of small satellite for scientific mission.

The spacecraft will be a technology demonstrator and caries a scientific payload. This scientific payload which is also developed in house is a sensor to measure space environment's total ionizing dose with a dynamic range from 0.1 Rad to 1 MRad Si. The programme adopts the technical and programmatic knowledge and experience gained from ATSB's other previous and existing programme TiungSAT-1 and RazakSAT. It utilizes CoTS (Commercial of The Shelf) components and is a platform for the assessment of local manufacturing and testing facilities.

The other objectives of the programme are to demonstrate the engineers' capability in terms of satellite bus design (all spacecraft subsystem such as structure and mechanical, communication, command and data handling and power) and the payload design; the dosimeter which was developed in-house.

The purpose of D-Sat dosimeter is to characterize the space environment in its orbit in terms of accumulated ionizing radiation dose and dose rates for a specific integration at different points in its orbit. A total number of 6 RADFET sensors will be used for this mission.

Out of the six RADFETs, it is proposed that two will have steel caps, two will have Al caps and the other two will have tantalum caps. All 6 sensors need to be placed on the external structure of the satellite and with clearance by other satellite structure, is able to provide 180° Field of View (FOV) allowing the sensor to look out into space.

Each RADFET sensor will consist of a matched pair, with three of the RADFETs being biased during exposure (MEASURE MODE), while the others remain unbiased. it is proposed that a constant current (10 µA) is switched to each RADFET in turn, and the threshold voltage will be measured. The gradual shift in this voltage difference is approximately proportional to the accumulated ionizing radiation dose. Three temperature sensors at each pair will be placed to monitor the temperature.