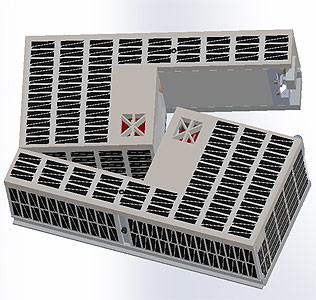 Cislunar Explorers is a planned nanosat mission by Cornell University, which was selected by NASA's CubeQuest Challenge.

The Cislunar Explorers are a pair of streamlined, sustainable spacecraft on a mission to orbit the Moon. They act as self-propelled engineering demonstrations, proving the technology readiness of water as rocket fuel, simple optical navigation, and more. Key subsystems complement each other in a symbiotic design aimed at reducing the cost and complexity of space exploration.

Cislunar Explorers consists of two L-shaped satellites, which fit together in the 6U CubeSat standard.

Cislunar Explorers is one of 13 cubesats planned to be carried with the Orion Artemis-1 mission into a heliocentric orbit in cis-lunar space on the maiden flight of the SLS (Block 1) iCPS launch vehicle in 2021.