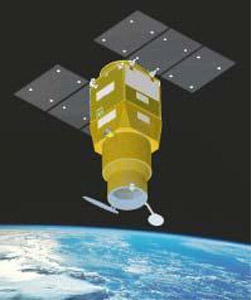 The ASNARO 1 (Advanced Satellite with New system Architecture for Observation) Project, formerly also known as SASKE (Small Advanced Satellite for Knowledge of Earth) and nicknamed Sasuke, started in JFY2008, is to establish next generation small satellite bus system based on open architecture technologies and manufacturing methodologies to drastically reduce the cost and the development period with adoption of up-to-date electronics technologies. The satellite bus system is composed of building block style of subsystem with the Space Wire network, and use high performance COTS, and improve verification test method.

The first mission is Earth observation with high performance optical sensor whose resolution is expected to be less than 1 m from 400 km to 600 km orbit, and the total mass of the spacecraft is approximately 400 kg. The spacecraft targets and takes user required images automatically with bus control system, and down link the data through high rate X-band advanced data transmission system.

The development of the spacecraft was completed by the end of JFY2010, and was originally planned to be launched in the year of 2011 on an Epsilon launch vehicle. Due to delays and the unavailability of the Epsilon, it was eventually launched in late 2014 on a Dnepr rocket.