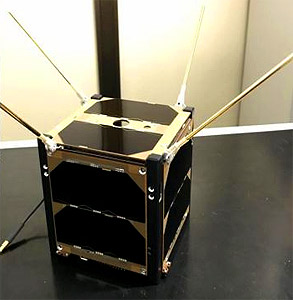 1KUNS-PF (1st Kenyan University NanoSatellite-Precursor Flight) is a 1U CubeSat developed by the University of Nairobi, Kenya, as a precursor for the Kenayan-Italian IKUNS earth observation CubeSat.

1KUNS, an extension of IKUNS (Italian-Kenyan University NanoSatellite), is a project run by the University of Nairobi in collaboration with La Sapienza University of Rome and the Italian Space Agency, and is part of the projects initiated in 2015 between ASI and La Sapienza under the Convention for managing activities at the Broglio Space Centre in Malindi (Kenya). IKUNS will involve developing a cubesat for Earth Observation and technological testing.

The aim of 1KUNS-PF is testing in orbit and prove functionality of several components, either commercial or developed in house, intended for use in the IKUNS mission. In detail, the in-house developed systems are:

The mission profile includes two basic nominal operation phases. In the first, data about the experimental on-board system performance are gathered by transmitting to ground the system telemetry data. This phase is mainly devoted to assessing the performance in orbit of the in-house developed solar panel. After deployment, the CubeSat turns on and starts transmitting a Beacon signal, containing telemetry data taken once per minute. This beacon transmission is useful for first acquisition by the ground station. At the same time a de-tumbling procedure is activated, in which the satellite residual motion is damped out. When this nominal configuration is achieved and reliable communication to ground have been established, the CubeSat starts its nominal mode based on a passive magnetic attitude stabilization: beacon is stopped with a specific command and the satellite is in stand-by mode, waiting for commands. Telemetry is stored on-board and downloaded to ground upon command to verify the health-status and performance. If all these operations are well executed its possible to consider the minimum mission goal is achieved. The second nominal operation mode, activated by specific command from ground, is devoted to taking a picture and sending it to ground and momentum wheel testing. If these two activities are correctly executed, the mission is considered completely successful.

1KUNS-PF has been selected by the Japanese Space Agency (JAXA) and the United Nations Office for Outer Space Affairs (UNOOSA) to benefit from the opportunity to be launched by the Japanese Kibo module in the International Space Station (ISS), as part of the KiboCUBE program.