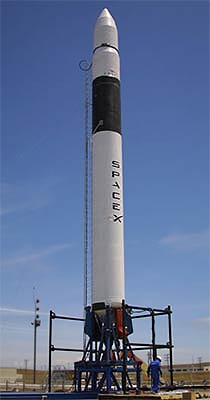 The first stage, which will be reusable after recovery by parachutes, is powered by the SpaceX built Merlin engine. The second stage is be propelled by the Kestrel engine, which uses technology derived from the of the Lunar Module Descent Engine.

Launch sites are SLC-3W at Vandenberg for high inclination launches and a launch site on Omelek Island in the Marshall Islands. A Cape Canaveral launch pad is also considered for launching into low inclination orbits.

The basic Falcon-1 vehicle carries up to 420 kg payloads to low equatorial earth orbit. SpaceX claims, the Falcon will reduce the costs for an orbital launch by the factor of three - a price of $ 6.7 million for the basic version is planned.