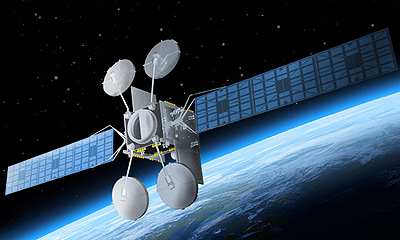 Boeing was selected to provide the all-electric propulsion BSS-702MP+ (originally BSS-702HP were to be used) busses, while the communications payloads are being build by ViaSat.

Each ViaSat-3 class satellite is expected to offer over 1 Terabit per second (Tbps)  or 1,000 Gbps  of total network capacity to deliver a global broadband network with enough bandwidth to deliver affordable, high-speed, high-quality internet and video streaming services.

The new first of the news spacecraft for the American market is scheduled to launch in late 2019 or early 2020 and is expected to provide more than 15 years of service life. The second satellite for EMEA will follow soon after. The first two busses were were firmly contracted with Boeing in July 2016 for ViaSat 3 Americas and ViaSat 3 EMEA. The third satellite was contracted in February 2019.

ViaSat 3 EMEA was originally to be procured jointly with Eutelsat, but in May 2018, Eutelsat dropped out of the joint venture.

One satellite is booked on an Ariane-5ECA rocket, while another will be launched on an Atlas-5(551) launch. Another launch contract was awarded to a Falcon-Heavy (Block 5). The first three satellites will be launched from 2020 to 2022. The Arianespace launch contract was in June 2019 changed to an Ariane-64 rocket for a 2021 launch. Due to the COVID-19 pandemic, the initial launch date slipped to 2022.