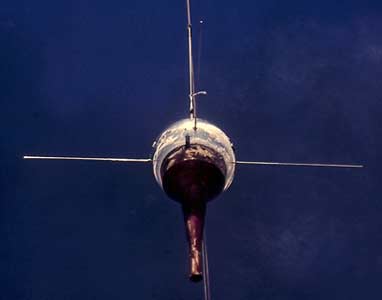 Vanguard 3 was launched by a modified Vanguard rocket from the Eastern Test Range into a geocentric orbit. The objectives of the flight were to measure the earth's magnetic field, the solar X-ray radiation and its effects on the earth's atmosphere, and the near-earth micrometeoroid environment. Instrumentation included a proton magnetometer, X-ray ionization chambers, and various micrometeoroid detectors. The spacecraft was a 50.8-cm-diameter magnesium sphere. The magnetometer was housed in a glass fiber phenolic resin conical tube attached to the sphere. Data transmission stopped on 11 December 1959, after 84 days of operation. The data obtained provided a comprehensive survey of the earth's magnetic field over the area covered, defined the lower edge of the Van Allen radiation belt, and provided a count of micrometeoroid impacts. Vanguard 3 has an expected orbital lifetime of 300 yr.