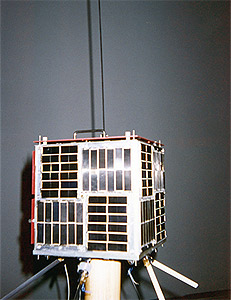 UNAMSAT (University of Mexico (UNAM) Satellite) is a 17 kg spacecraft built in Mexico at UNAM, a Mexican University.

The primary payload is a 40.997 MHz pulse radar associated with a wide band receiver to study micro-meteorids and the ionised trails left by these as they enter the atmosphere. It also carries a communications data relay for environmental sensors in remote locations.

UNAMSAT A failed to reach orbit due to a launcher failure during the maiden flight of the Start booster in early 1995.

UNAMSAT B microsatellite was launched on the 5th September as a secondary payload on a Kosmos-3M rocket with Kosmos 2334 (Parus #86) from Plesetsk, into a 1010 × 988 km circular orbit inclined at 82.9°, with the Parus navigation satellite being the primary payload. In Aug 97 it is reported to have started experiencing trouble with the power system for the downlink.