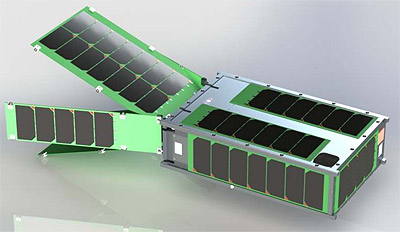 The TRYAD (Terrestrial Rays Analysis and Detection) is a science investigation mission aimed at studying terrestrial gamma-ray flashes (TGFs) with a pair of 6U CubeSat in LEO to use multipoint observations to constrain TGF beams, which will allow us to distinguish between TGF models and thunderstorm electric fields.

In the early 1990s, the spacebased Compton Gamma Ray Observatory discovered totally unexpected sources of gamma rays coming from Earth. Bright flashes of gamma rays were originating in high altitude lightning clouds. They were called Terrestrial Gamma Ray Flashes or TGF's. Since then, several theoretical models for the mechanisms of TGF's have been proposed. One of the unknowns about TGF's is their spatial structure: beam width and tilt. Large satellites measuring gamma rays cannot verify these models as several simultaneous measurements are required. Satellite platforms have proven to be one of the best ways to measure TGFs.

With funding from the National Science Foundation, researchers at the University of Alabama in Huntsville (UAH) and at Auburn University (AU) are working together to build two CubeSats fitted with gamma ray detectors. The UAH team is developing the gamma ray detector using scintillating material. The AU team is developing two CubeSats capable of housing and handling the gamma ray detector. Once launched, the AU team will command and control the two satellites and UAH will plan the operations and analyze the data. The Goddard Space Flight Center is developing the light collector for the gamma ray detector. A high bandwidth radio will be used to transmit high data rates from the satellites to ground stations. The mission may use the NASA Near Earth Network for data capture. An outreach component using a transponder on each satellite is being planned to reach pre-college students. The two CubeSats are developed by teams of AU students with mentoring by faculty members.