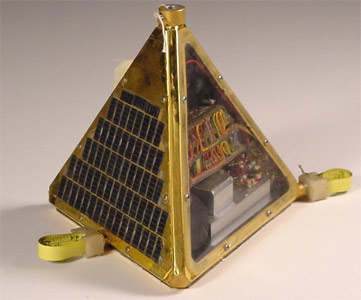 The basic configuration of the TRS Mk.2 spacecrafts was a regular octahedron measuring 23 cm on a side. Solar cells mounted on each side of the faces provide sufficient electrical power to operate the experiments and the telemetry system when the satellite is illuminated by the sun. No internal battery or command system were provided. The satellite subsystems consisted of electrical power, antenna, telemetry, experiments, and mechanical structure.