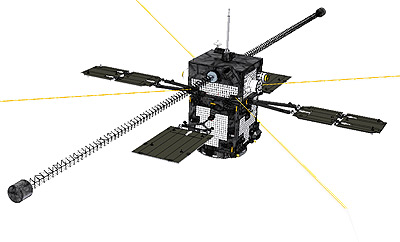 The SPRINT B or ERG (Energization and Radiation in Geospace) is a geospace exploration mission in Japan for the solar maximum and subsequent declining phase of solar cycle 24. After reaching orbit, it was named Arase.

The mission is especially focusing on the relativistic electron acceleration mechanism in the context of the cross-energy coupling via wave-particle interactions as well as the dynamics of space storms. The interplay among different plasma/particle populations of the inner magnetosphere; plasmasphere, ring current/plasma sheet, and radiation belts is a key to understand the energetic particle accelerations. The cross-regional coupling such as magnetosphere-ionosphere via FAC and the potential electric fields causes the spontaneous variations of the ambient fields.

The comprehensive instruments for plasma/particles, field and waves are installed in the SPRINT-B/ERG satellite to elucidate the electron acceleration processes. The newly developed system will directly measure the flow of the Poynting flux between particles and waves in the wave-particle interactions.

The SPRINT-B/ERG satellite of ISAS/JAXA was launched on an Epsilon rocket into inner magnetosphere in December 2016.